The seventh session of the Abu Dhabi-Japan Economic Council (ADJEC) kicked off today (Day, October XX, 2020) on a virtual platform to discuss ways of enhancing economic, commercial, and investment cooperation between Abu Dhabi and Japan in several economic sectors of mutual interest, considering the impact of the COVID-19 pandemic to the global economy. 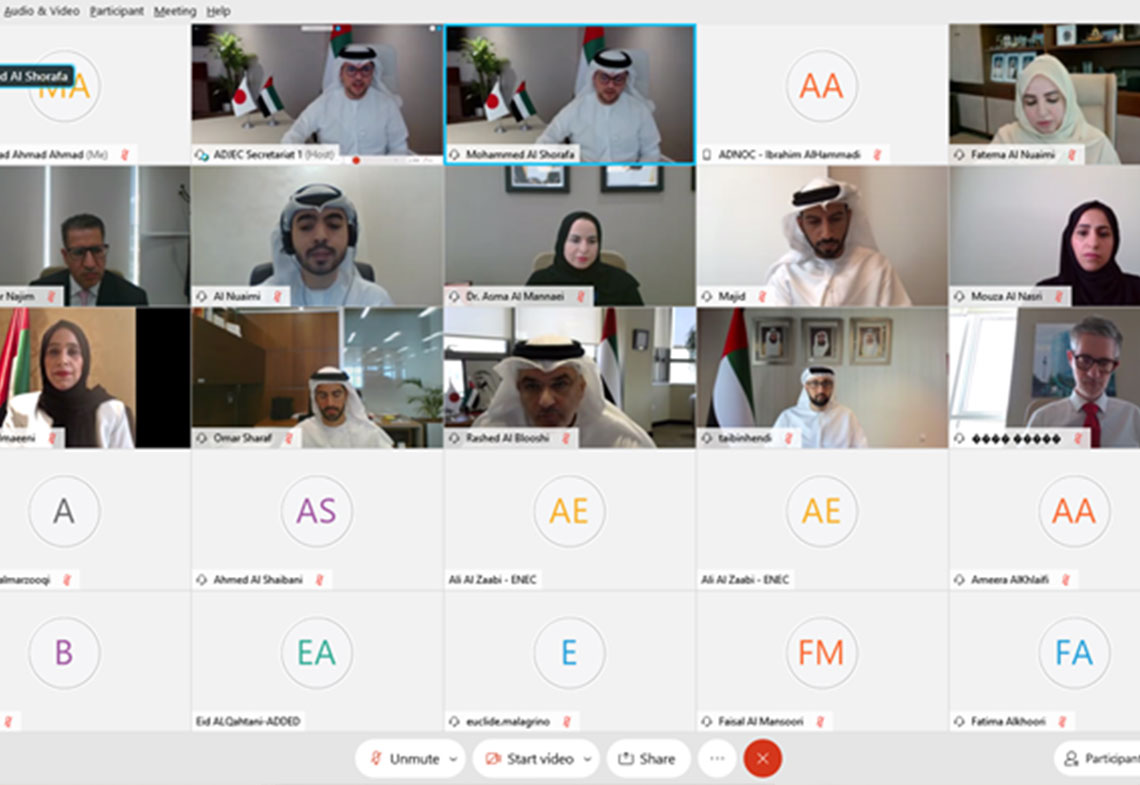 The seventh session of the Abu Dhabi-Japan Economic Council (ADJEC) kicked off today (Day, October XX, 2020) on a virtual platform to discuss ways of enhancing economic, commercial, and investment cooperation between Abu Dhabi and Japan in several economic sectors of mutual interest, considering the impact of the COVID-19 pandemic to the global economy.

The session is a follow up to the implementation of decisions made during previous sessions that were held alternately in Tokyo and Abu Dhabi, including the implementation of key recommendations aimed at enhancing business cooperation between the two countries. The 7th session is also set to advance the interest of Japanese companies keen to expand their investment and commercial activities in Abu Dhabi and the UAE in general.

H.E. Mohammed Ali Al Shorafa highlighted during the opening ceremony of the session that the Council’s latest meeting is taking place under exceptional circumstances imposed by the COVID-19 pandemic, noting that further efforts are required from both parties to achieve common goals in enhancing the economic and investment relations between Abu Dhabi and Tokyo. He added that current challenges can be overcome through openness to investment opportunities available on both countries, particularly in sectors that support sustainable economic development.

H.E. Al Shorafa said: "The pandemic has pushed us to putting work more seriously and persistently than before, in which innovation and technology are currently our strategic development objectives in the coming period for all economic sectors, particularly for the non-oil ones which significantly contribute to achieving self-sufficiency and sustainable development."

The ADDED Chairman further stated that the ongoing COVID-19 pandemic is exacerbating the global economic crisis and affecting the national economy which has become one of the most prominent emerging economies globally due to its rapid ascendance and huge developments in the past decades. He added that overcoming the crisis requires all concerned parties to work together and protect what has been gained and create effective partnerships with international organizations.

H.E. Al Shorafa pointed out that the political and economic relations between the UAE and Japan continues to deepen, thanks to the friendly relations between the two countries and its people as seen in ADJEC’s previous sessions where it succeeded in establishing a solid platform for expanding joint initiatives to several other sectors.

H.E. Kiyoshi Ejima, Japan’s State Minister, Minister of Economy, Trade and Industry, who addressed the attendees through a recorded speech, said that the Japanese government remains committed to further enhancing the economic and investment relations with the emirate of Abu Dhabi and the UAE in general, in line with the current integrated strategic partnership initiative between both parties.

H.E. Ejima also hailed the UAE’s leadership and the government on the successful launch of the ‘Hope Probe’ to Mars in July from The Tanegashima Space Center (TNSC) in Japan, which marked as the first space mission to explore planets in the solar system led by an Arab country.

He highlighted that the Abu Dhabi government is committed to enhancing the role of the private sector as a key partner and driver of the emirate’s sustainable economic development, and cited the major steps taken by the Abu Dhabi government to minimize the impact of restrictions due to the COVID-19 outbreak on companies, encouraging them to improve business continuity measures amidst the crisis and benefit from the set initiatives launched under the Abu Dhabi Development Accelerators Program, ‘Ghadan 21’, especially for start-ups and Small and medium-sized enterprises (SMEs) focused on providing advanced technologies that would boost knowledge transfer to the emirate’s economic ecosystem.

"The Abu Dhabi government’s leadership looks forward to a new phase of economic and political relations with Japan driven by our mutual understanding to enhance the local economic ecosystem focused on innovation, technology and knowledge. It comes in line with the efforts to transition the emirate towards achieving self-sufficiency through successful partnership between the public and private sectors in both countries in line with our strategic goals for future generations," H.E. Al Shorafa concluded.

H.E. Nobuyori Kodaira, President, Japan Cooperation Centre for the Middle East, expressed his confidence that the session would contribute to establishing new areas of cooperation and further enhance the economic relations between both parties. He said that Japanese organizations are keen to explore two main economic areas in Abu Dhabi, namely the new foreign direct investment law and the investment focus of the emirate, in light of the Japanese companies’ interests and their willingness to access the UAE with  new successful investments.

H.E. Kodaira said that Japanese companies take into account the difficult circumstances currently imposed by the COVID-19 pandemic globally, noting that improving communication with their counterparts in the emirate of Abu Dhabi will further enhance the investment opportunities between the two sides, which is the Council’s key focus in the coming period.

He further reiterated JCCME’s commitment to promote Japanese investments in the Middle East, while considering the UAE as a leader in the region when it comes to having the highest investment potentials for Japan.

The Council’s working group for the energy sector, the Sustainable Energy Working Group, welcomed the Abu Dhabi National Oil Company’s (ADNOC) proposal to expand the scope of its activities for the Japanese side to cover the non-conventional energy sources in light of the increasing interest in hydrogen energy as a future source. The Japanese counterparts expressed their interest in enhancing cooperation in this field.

Meanwhile, the Infrastructure Working Group, led by the Department of Municipalities and Transport (DMT) and the JCCME, focused on the outcomes of the transportation workshop that was organized in February this year between the two sides in cooperation with the World Trade Centre. The group recommended to expand cooperation initiatives with Japan concerning technology transfer in the transport sector - from Japanese companies to the emirate of Abu Dhabi.

The Education and Human Resources Working Group with participation of the Japan Center for International Cooperation have agreed to introduce a new joint program for human resources development between the two sides. While the Healthcare Working Group focused on the outcomes of the workshop held between the two sides in September 2020, which discussed the areas of artificial intelligence application within the hospitals systems and health services centers.